Nicole Hirsch Whitaker graduated from NYU Tisch School of the Arts with a Bachelor of Fine Arts and then began her career as a still photographer. For the past 20 years, Nicole has worked in all mediums, from fiction and non-fiction to television and commercials.

She got an Emmy nomination for the documentary Rising girl and for Kurt Cobain: Editing Heck. Most recently, Nicole filmed episodes of Amazon’s critically acclaimed series Patriot and the first season of Are you sleeping? She is currently shooting Notre-Dame, LTD, the upcoming neo-noir thriller series starring Ben Kingsley, Jimmi Simpson, Jacki Weaver and Luis Guzmán. 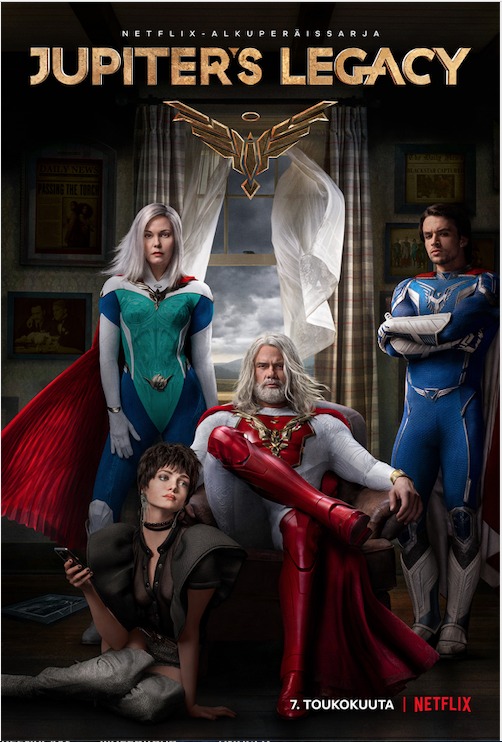 Nicole’s latest job as a co-DP on Jupiter’s legacy premiered on Netflix. The superhero streaming TV series created by Steven S. DeKnight is based on the comic book series by Mark Millar and Frank Quitely. Jupiter’s legacy follows the world’s first superheroes, who have kept the world safe for almost a century. Now their children must live up to their legacy in an epic drama that spans decades and navigates the dynamics of family, power and loyalty.

Thank you for taking the time for this interview. What attracted you Jupiter’s legacy?

Nicole Hirsch Whitaker: I was approached by Steven (S. DeKnight) because he was a huge fan of Patriot, a television series I had worked on. He had contacted me and the other DP who had worked on the series to join him on Jupiter’s legacy. I had never done anything like this – a great superhero action series. I was surprised because it was pretty much the antithesis of Patriot, which was a drama founded with a bit of comedy. Heritage looked so fun and loved meeting Steve. We got along really well and I decided it would be a perfect match so I signed.

Did the creative team script most of the action scenes?

Nicole: Yes. We had four different directors who each expressed different things that they wanted. I would say 90% of the action scenes were scripted. And the lead crew, who had been working on the show for about nine months, did a lot of pre-work before we got there to rehearse.

You used subdued sepia lighting in many non-action scenes. What were you thinking there?

Nicole: We had two different lights. There was the modern light, which took place in the 2000s. And flashback scenes, where we went with a warmer, more desaturated quality, mirroring Kansas and Chicago in the 1930s. We used lighting as a storytelling tool to turn people’s heads into another era.

It looks like you used CGI and wiring to create some really compelling fight sequences. What challenges have you encountered in uniting these elements?

Nicole: We have worked a lot with doubles. Each superhero had a Digi-double. And we always knew that if we made a plan, we predicted where the wires would go. With the stunt team, we had to use cranes to lift them. We tried not to overdo it with the cast from our first team. Each actor had a stuntman. And they looked amazing. For me, it was about trying to figure out how to rig everything around the lighting and shots that the different directors wanted.

In episode four, All the devils are here, you open with a strobe-lit dance sequence, followed by a time stop. Problems with lighting and camera angles in this nightclub?

Nicole: Yes. This is the first thing I took. So when I got to Toronto, the manager said, we’re going to this famous nightclub, which could hold about 5,000 people. And we only had 150 extras. We talked about creating layers and foreground elements with lighting to make the place feel like it was crowded. Chris Burns ran this show and he had worked with Howard who was a laser genius and did tons of rock ‘n roll shows. So we did a lighting test and a preparation day with all these lasers. But lasers aren’t good for people or cameras, so we had to be safe when using them. But they were great at creating a sense of depth in the space, which made it feel like there were a lot more people in the club. We also used lasers for this time freeze scene. It was my first day and they kind of threw me into the fire (laughs).

Chloe’s modeling shoot had a lot of quick cuts and spins, ending with her throwing the car into the air. How did you make it so realistic?

Nicole: It was a really fun shoot with three units. A unit shot close-ups of Chloe (Elena Kampouris). We didn’t have a green screen that day, but we did have a green car made of moss that it lifted up into the air. Everything else was done in post. But it was mostly CG, even though we had small parts of the car that we were using. The scene was beautifully scripted by our director, Chris (Christopher J. Byrne). Our amazing visual effects team was in-house, with Jim Mitchell our visual effects supervisor, Paul (Russo), Wes (Wesley Sewell) and Christina (Graff). We met every day and did a lot of preparation on the shooting days. An affected person was still with us. So if we had any questions, they would be there to find out. All of this support made the experience much more enjoyable.

In episode 7, Omnes Pro Uno, you open with a sort of Blade runner ambiance with umbrellas and a tightly choreographed samurai combat sequence. What are you going to do there?

Nicole: It was fun and stimulating. We were in the middle of an icy tundra in Toronto. They ran out of steps so had to build one in the parking lot. And the night we were shooting, we were supposed to have a lot of rain, which wasn’t there. So you only see water drops because we couldn’t get the rain bars to work or people would have frozen. The sequence was a tribute to a scene in the film titled The great master. We wanted something very different from everything else in the series, which stood out.

Turn on this island, with its different climates and this horrible sandstorm. Lots of preparation I imagine?

Nicole: We shot this in a limestone quarry in Uxbridge, Toronto. The effects department and artists tiled the entire footage. If you look outside you will see cranes and equipment digging sandstone. They created this landscape except for the portion of sand where we were filming. As for the sandstorm, the special effects department used thick, heavy paper particles and blew them out of the cannons using those huge fans.

When the magic wall lights up with neon symbols, our heroes enter a planet with its surreal images. I can imagine the challenges you encountered while pulling it.

Nicole: It was all on stage at Pinewood. We had five or six stages built. We used LED light panels to create the symbols that light up on the wall.

So when that huge wall opens up and the superheroes step into that blinding light, the effect is amazing.

Nicole: I borrowed the effect from Close encounters when the ship opened up and there was this gigantic light. We grabbed this huge source of light and just let it go out.

In the last episode, How it all ends, the battle in the light beam room is impressive. Can you talk about how you brought this to life?

Which director or which film attracted you to the cinema?

Nicole: Good question. When I was in high school we would read a book and then go see the movie it was based on. And we’ve seen some pretty unusual movies: Pasolini’s movies, Antonioni’s movies Red desert, and that of Vittorio De Sica Bicycle thief. We have learned to tell a story in two ways: through movies and novels. Until then, I just wanted to be a still photographer. But I discovered that if you want to move people, you have to do it through cinema. Bertolucci and Antonioni are the two filmmakers who opened my eyes to cinema and cinematography. Their films were so beautiful and so anchored in the image.

Any advice for young filmmakers trying to break through?

Nicole: The best advice I ever received was when I started working. I didn’t go through the usual channels: internship, assistant camera, cameraman, then DP. But because I had a solid background as a still photographer when I graduated from college and went to film school, a director I started with told me to start. to turn. I had been shooting commercials for most of my career, so I had no idea what I was doing and learned on the job. At the time, there were very few women making films. So I would say to shoot short films, to realize your passionate projects, and I hope you will meet someone who evolves with you.

So how did filming commercials help you?

Nicole: The thing with ads is you use your own cameras. If you are starting out in storytelling, you have a cameraman, so you are not learning this trade. And because you have more money in ads, you can use all the new tools: new cranes, cameras, lenses. In independent films, you struggle to get a good camera. With ads, you travel the world and use the latest equipment. But I got into cinema just at the right time because streaming was starting to take off.

Jupiter’s Legacy is available on Netflix